Detail of battling warriors from the west wall of the Heroön of Trysa frieze in the Ephesos Museum, Vienna. Image: © Duncan JD Smith

In 1841, a Polish-Prussian school teacher and Classical philologist, Julius August Schönborn (1801–1857), set out to explore the Teke Peninsula in southwest Turkey. Over two thousand years earlier, this mountainous region east of Rhodes had been the Kingdom of Lycia. Schönborn recognised the characteristic ogival stone sarcophagi and pillar tombs of the Lycians. What he discovered on 20th December, however, was altogether different. The so-called Heroön of Trysa was the tomb of a powerful Lycian dynast surrounded by a precinct wall covered with remarkable mythological friezes. The subsequent fate of these friezes would embellish an already intriguing archaeological tale.

The site of the Heroön of Trysa today, shorn of its remarkable friezes, on a ridge in the Taurus Mountains. Image: © Ephesos Museum, Vienna

Considerable mystery surrounds both Trysa and the Lycians. Prompted by the paucity of prehistoric material on the peninsula, archaeologists have suggested the Lycians were nomadic settlers. Pottery excavated in the 1950s at the better-known Lycian site of Xanthos suggests they arrived in the area during the 8th century BC. If correct, this would make their appearance contemporary with Homer, the semi-legendary author of the Iliad and the Odyssey. Indeed the first literary mention of Lycia is in the Iliad, where Homer writes that “The Lycians were led by Sarpedon with Glaucus, the heroes, Far from Lycia, from the whirling waters of Xanthus” to fight in the Trojan War. Herodotus later posited that Sarpedon had conducted the Lycians to Turkey (Anatolia) from Crete.

As for the name ‘Lycia’, according to Greek mythology it derives from an exiled Athenian merchant, Lycus, who settled in the area sometime in the 5th century BCE. During this time Lycia came under considerable Greek economic and cultural influence, and Lycian deities found counterparts in the Greek pantheon. Following the Peloponnesian War (431–404 BC), however, Lycia fell increasingly under Persian sway. Greek artisans, notably those based in war-torn Athens, sought work instead in Anatolia and it was during this time that the Heroön of Trysa was constructed.

Trysa is located 2,600 feet above sea level on a long ridge of the Taurus mountain range overlooking the Demre Gorge, between the Lycian towns of Myra and Cyaneae (its nearest modern neighbour is the village of Gölbaşi). During Lycian times it would have been one element in a patchwork of city-states that covered the Teke Peninsula. The name ‘Trysa’ makes no appearance in ancient literature though and instead is known only from inscriptions, as well as coins of the period inscribed ‘TR’.

Other than a small ruined temple and some cisterns, Trysa’s monuments are all sepulchral. Consisting of plain and decorated ogival sarcophagi, as well as a ruined pillar tomb, they dot the partly-terraced ridge, which was originally surrounded by a rubble-built circuit wall of which only the north and west parts remains. These structures aside, Trysa’s great treasure is its heroön.

Model of the Heroön of Trysa as it appeared when first discovered.

A heroön is defined as a shrine constructed in the Classical world over and around the tomb of a respected ruler and used for their veneration and hero worship. The Heroön of Trysa stood at the northeast end of the site, where it consisted of a multi-storey tomb of an unnamed ruler and his family set in the middle of a sacred precinct approximately 70 feet square. The precinct wall, which stood nine to ten feet high, was covered on its inner face on all four sides, as well as the outer face of the entrance side, with an originally polychrome limestone frieze in two horizontal bands, one above the other. The funerary cult was celebrated in an adjacent timber structure.

It is these reliefs that make the Heroön of Trysa so special. Probably carved around 380 BCE by émigré Greek artisans, they uniquely intertwine Lycian mythological heroics with similar Greek episodes, which were used to emphasise the heroic status of the buried ruler. These include scenes from the Iliad and the Odyssey, the exploits of Theseus, the Oedipus-themed Seven against Thebes, as well as battles of Greeks and Amazons, Centaurs and Lapithae. Typical is the Homeric scene flanking the entrance in the south wall showing the Corinthian hero Bellerophon on his winged horse Pegasus confronting the fire-breathing Chimaera.

Also noteworthy are the masterful representations of flowing drapery, the intimations of linear perspective and the novel framing fillets used to break up the scenes on each stone (these include a tree, its trunk and branches shared by two adjacent stones, and the rudders of beached ships dipping down into the scene below). All these are deployed on the west wall in the lively scene of a seashore battle followed by the siege of a city, which in turn gives way to an Amazonomachy (a clash with the legendary all-female warriors). It is difficult not to assume the scene was inspired by the siege of Troy.

Reconstruction of the entrance to the Heroön of Trysa at the Ephesos Museum in Vienna. Image: © Duncan JD Smith

Unfortunately when describing the Heroön of Trysa today one must use the past tense. Visit the site now and whilst the setting remains undeniably dramatic, the Heroön is largely gone. Its original discoverer, Julius August Schönborn, died in 1857 without leaving a map. This didn’t stop a team of Austrian archaeologists setting out in 1881 though to rediscover the site. They were led by Otto Berndorf (1838–1907), Professor of Classical Archaeology at the University of Vienna and first director of excavations at Ephesus.

Berndorf was different from Schönborn in having the financial resources and political clout to acquire the Heroön for Austria. With financing in place and permission from Ottoman officials, all Berndorf needed was the manpower required to dismantle the monument. His crew built a road up to the site bringing tools and provisions necessary for the job. They then set about disassembling the frieze, as well as the monumental gateway and parts of the tomb. These were then loaded onto carts and brought down to the sea.

Considering the task in hand, the job went fairly smoothly. It was only marred by the magnificent gateway tipping over a cliff during transport and crashing on rocks below. Despite this the precious cargo was eventually loaded onto a ship and transported to Trieste. Thereafter it was moved overland to the Austrian capital, Vienna, where it arrived in 1884.

Detail of a seashore battle scene from the west wall of the Heroön of Trysa in the Ephesos Museum, Vienna. Image: © Duncan JD Smith

The component parts of the Heroön of Trysa were deposited at the soon-to-be-completed Kunsthistorisches Museum on Vienna’s famous Ringstrasse. Construction, however, was too far advanced to incorporate what would be an enormous exhibit when reconstructed. So instead, and despite all the effort in acquiring them, the friezes were stored away from the public gaze in the museum’s basement.

For the next hundred years, the Trysa frieze lay hidden. Only in 1984, and then only for a couple of days, was the dismantled frieze made accessible to the public during an Open Doors event. That some 6,500 visitors attended was a measure of the public’s curiosity in this unique Classical treasure. With the event over, however, the depot closed its doors on the friezes once more. 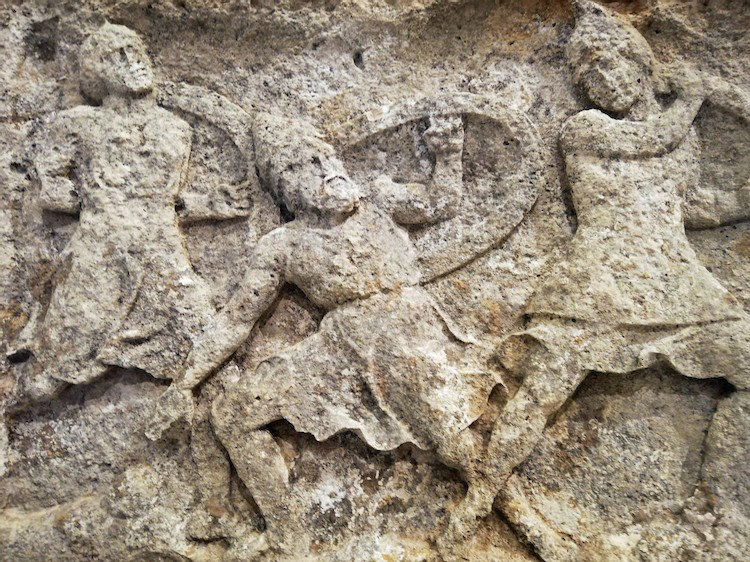 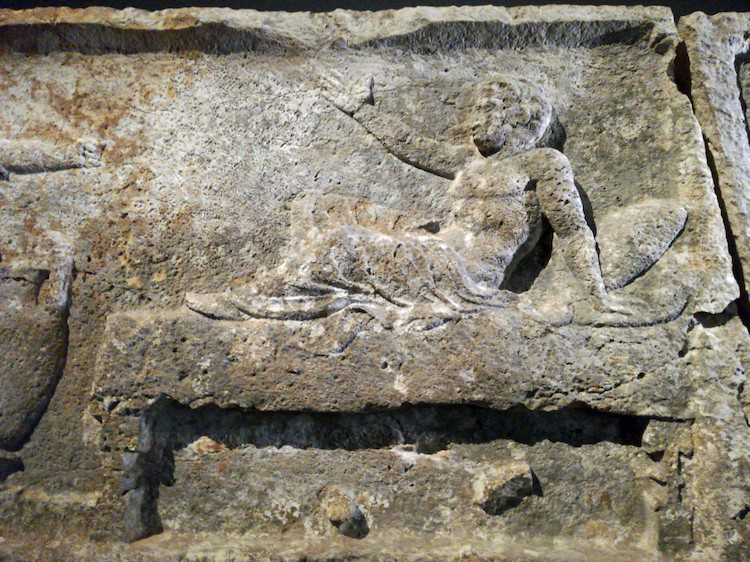 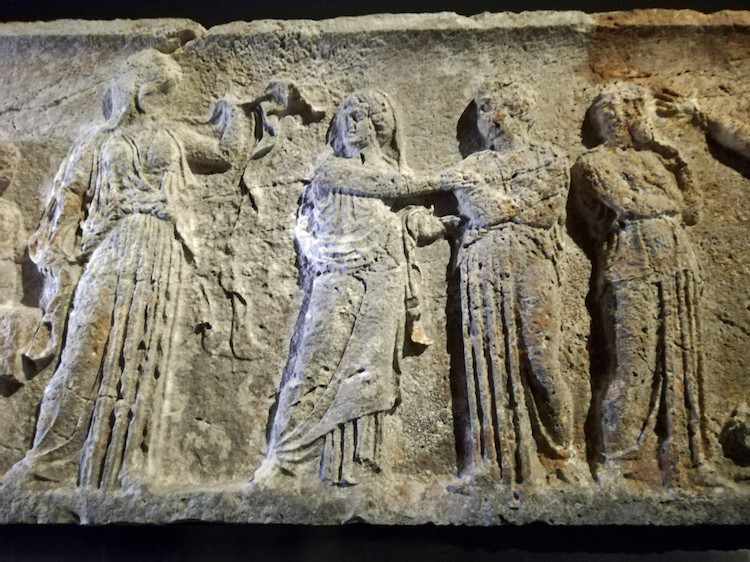 Thereafter various ideas to display the friezes were proposed, including the construction of a new subterranean gallery beneath the museum forecourt. None came to fruition though due to lack of funds. Only in late 2018 was a partial solution found when some of the reliefs were displayed in the Ephesus Museum, which since 1978 had occupied rooms in the Habsburg’s Neue Burg on the opposite side of the Ringstrasse. With space limited and the weight of the frieze a cause for concern, it is only a partial reconstruction, the main gateway for example being an artistic representation only*. The chance to get up close to a part of the frieze after so many years, however, is worth the compromise, and the experience is nicely fleshed out by a scale model of the heroön as it would originally have appeared. The longer term plan is that the entire frieze will be displayed in its own gallery on the ground floor.

* Several relief panels are also currently on display in the Collection of Greek and Roman Antiquities at the Kunsthistorisches Museum.

Travel writer Duncan J. D. Smith is the author and publisher of the Only In Guides, a series of city guidebooks aimed at independent cultural travellers. You can find out more about his work at www.onlyinguides.com and www.duncanjdsmith.com.

Following in the footsteps of Dalí and the Dictator